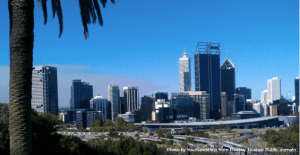 Perth in Western
Australia has
been voted the second friendliest city in the world by Condé Nast Travelermagazine.

Perth’s proximity to Asia makes it an ideal short trip destination. Not only does Perth share the same time zone as Singapore and Malaysia, a 5 hour flight can deliver you to a city that is now home to some of the world’s best hotels and a thriving food scene.

Condé Nast magazine says “Perth has put itself on the map in recent times, becoming Australia’s rising star, thanks to a boom of hip restaurants and lodging. As one reader said, “I’ve never said wow so many times,” one vistor said.”

Why visitors are saying “Wow”

As well as being voted the second friendliest city in the world, Perth is also home to the second best hotel in the world, according to Condé Nast magazine. Opened in 2015 by Prince Charles, Como The Treasury is the sumptuous result of a $110 million redevelopment of the 140 year old former state treasury building.
Visitors are now spoilt for choice when it comes to luxurious hotels in Perth. In May 2017, the Marriott opened the $70 million Perth Aloft Hotel, the first of the Marriott’s Aloft brand to be opened in Australia. In December 2016, the 500-room Crown Towers open its 6 star doors following a A$650 million build.  While the boutique-style, and achingly hip, Alex Hotel opened in Northbridge, the city’s nightlife hub.

Did we mention the choice of clean, serene beaches close to Perth? Or the otherworldly Pinnacles two and a half hours north of Perth? Or the pinch-yourself view from Kings Park and Botanic Gardens – just one of the many special places with a precious aboriginal history.

Come and say “Wow” for yourself

Australia now has more visa agreements with more countries. The most regular visitor visa, the Electronic Travel Authority (subclass 601), can be booked through travel agents and airlines.

For more frequent short trips, you can opt for the Visitor Visa (subclass 600) which enables you to visit family, carry out business meetings or take more holidays.

Visitor visas have been simplified for Chinese tourists with the launch of the Frequent Traveller stream of visitor visas. This visa has been created specifically for Chinese visitors looking to make repeat trips to Australia and is valid for 10 years.

Come and say “Wow” for yourself!